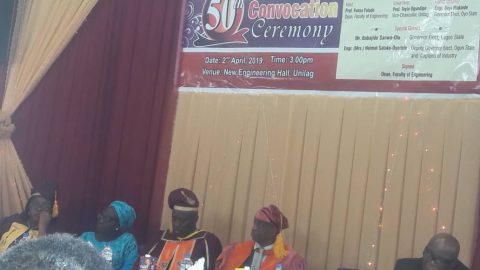 The University of Lagos Faculty of Engineering Alumni Association (UNILAGFEAA) has announced it would hold an Annual General Meeting of its members on April 25, 2019 at the Julius Berger Auditorium, Unilag.

Publicity Secretary, Engr ‘Biodun Oyedepo, said the announcement was also to felicitate with three of the Association’s Members who won gubernatorial elections recently. The Association’s Chairman, Engr Titi Omo-Ettu, congratulated both the new graduates and the members who got gubernatorial mandates. He asked engineers to go on to infiltrate the nation’s political landscape, so the culture of complaints would give way to one of excellent performance by political office holders in the true tradition of products of the Nation’s University of First Choice. Engr Omo-Ettu also commended the Dean of the Faculty, Engr Prof ‘Funso Falade for initiating the Faculty of Engineering Hooding Ceremony in collaboration with UNILAGFEAA.