Mr Abdulaziz Yari is probably daring Nigerians. At least he is daring me.

The former Governor of Zamfara state has refused to disclaim a letter which has been running wild on social media. I received 12 copies from various posts.

Surprisingly, even newspapers that we consider as responsible media are reporting on the letter. Yes the letter may exist. But could Yari have been the author?

For me, there is no evidence that he wrote that annoying letter which purports him to have been demanding that the state he (mis)governed for eight years should restore paying him N10m EVERY MONTH as pension which, according to the letter, has the backing of a law made by his state legislature and approved by him two months before he left office as Governor.

He must be an arrogant man not to have, within 24 hours, shouted to the world that he never wrote that letter. Perhaps he did.

But then another angle to the story is that news broke that Zamfara State legislature promptly repealed a law which it made on the subject of pension to its retired Governor. That suggests that at least something like what the so called letter contains must have happened to jolt the joker-legislators of Zamfara state into that bizarre action.

It is a difficult subject to discuss now whether the letter is fake or not. I still think it is fake.

If, however, Mr Yari actually wrote that letter that we all read, then a prison warder who lives closest to him should know what to do….. Hold the man by the hand and match him into the federal prison in Zamfara. Simple.

A PUNCH report on it is at

And the offending letter:
– 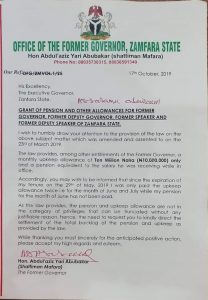